Hereby we have to inform you, that we will renovate our hotels: Hunguest Hotel Bál Resort, Béke, Flóra, Galya, Helios, Panoráma and Répce. The renovation works will last for a longer period whilst the hotel is kept closed. We ask for your patience and kind understanding. Thank you for choosing us so far, stay our loyal customer during the time of renovation, which will allow us to welcome you in an embellished and fully renovated hotel.

HORSE RIDING
Our guests, both experts and beginners, may take part in this experience in Varga farm of Csepreg, 10 km’s from Bükfürdő. The surrounding meadows and forests provide a picturesque venue for the enthusiasts of this sport.

HUNTING
Through Büki “Csalitos” Hunter Association, you may purchase Hungarian hunting tickets, giving you opportunity to hunt in 3.300 hectares of forest, 5 km’s from the hotel. In this area, you may hunt: hind, calf, doe, fawn or boar. More information from the Hunter Association.

FISHING
The nearest possibilities to Bükfürdő for fishing enthusiasts are the Répce river or Boldogasszony lake. To enjoy this pastime, an ID card or passport is needed from our guests visiting us from abroad. Equipment should also be brought by the guests. In the aforementioned waters, you may find the following fishes: In the river: trout, chub, pike, and different types of bream. In the lake: carp, pike, walleye or amur.

GOLF
You can find Birdland Golf & Country Club in our hotel’s neighbourhood (only around 500 m’s), which has Hungary’s first 18-hole championship golf course. As of last year, they await guests 9 new sections and 27 holes. You may choose from different packages, rent equipment, or even take part in an individual instruction.

TENNIS
500 m’s from our hotel, you may use 4 open-air and 2 covered tennis courts after setting an appointment. Upon demand, they offer you balls and tennis rackets free of charge. A tennis instructor is also available, if discussed in advance.

A city of 90 thousand inhabitants, Szombathely has been inhabited by numerous ethnic groups for thousands of years. It was founded by a crossing of the amber roads, leading from the Adriatic to the Baltic sea, by the Roman emperor Claudius in 43 AD. The city was called Colonia Claudia SAVARIA, and soon it became a flourishing centre of the late roman province Pannonia Superior.

The county seat of Vas county was built on the grounds of Savaria. The ruins of the roman times can be visited in the Járdányi Paulovics Ruin Garden, and in the Iseum, a sanctuary to the Egyptian goddess Isis.

The county seat was moved to Szombathely from Vasvár in 1578 because of the danger posed by the Turks. The real development of the city started after establishing of episcopate in 1777. The baroque style city centre was formed during the live of the first bishop, János Szily. Memories remaining from those times are the Bishop’s Palace, the Cathedral and the buildings of Seminary. On the main square of the city, you can see 18-19th century civil houses. Out of these, house number 40 is of international renown, as it was the home of Leopold Bloom, the hero of Ulysess, written by James Joyce.

It is also worth to visit: the Savaria Museum (archaeological exhibitions, ancient ruins), the Smidt Museum (a private collection of old furniture and other objects of use) and the Art Gallery (modern art). In the open-air museum (Skanzen) old folk buildings are presented from the county. It is also worth to visit the Arboretum of Kámon, with the richest collection of trees in the country.
The county seat is rich in cultural programmes, such as: Spring Festival, Saint George day's Handicraft Fair, Savaria International Dance Contest, Leopold Bloom's Day, Bartók Seminarium and Contest, Savaria Carnival, Pannon Autumn.

The church of Ják – originally a benedictine monastery, known currently as Saint George’s parish church – is well-known as Hungary’s most important example of Romanesque architecture.

Built in more stages during the XIII. Century, both the outside and inside of the church is adorned with rich sculptures. The 3 naves and 3 apses are formed in a basilica structure. Columnar capitals are sculptured by plant and some animal ornamentation.

The city has been named after the Árpád-era castle, which can still be seen nowadays on Óház-hill.
The origins of the only free royal town in the historical garrison county of Vas (Eisenburg) go back to the third quarter of the thirteenth century. It was founded by the Kőszegi family, a branch of the Héder clan, who had settled in Hungary in 1157 AD. Sometime before 1274 Henry I and his son Ivan moved the court of the Kőszegi, a breakaway branch of the family, from Güssing to Kőszeg (Güns). For decades, the town was the seat of the lords of Kőszeg (Güns). Only in 1327 did Charles Robert of Anjou finally break the power of the Kőszegi family in Western Transdanubia, and a year later, in (1328), elevated the town to royal status. The town boundaries were fixed during the Anjou dynasty (1347–1381).
In the third wave of the great wars against the Turks in the sixteenth century, Kőszeg became the major flashpoint of the campaign of 1532. Between August 5–30, Grand Vizier Ibrahim led 19 major assaults against the town. Under the leadership of the town and fort captain, Nikola Jurišić, a small garrison of only 800 Hungarians and Croats repelled an Ottoman force numbering some 80,000 men in the Siege of Kőszeg. After the final unsuccessful attack, the Turkish leadership were forced to decamp due to an uprising by the Janissaries. According to tradition, the last contingent of withdrawing troops were meant to have left the city limits around 11 o'clock. As a memorial to this historic heroism, the church clocks in the town have read 11 o'clock since 1777.
Kőszeg is a paradise for cyclists, with paths running through the wonderful world of the Írottkő Nature-park. Old wine cellars recall a viniculture going back several centuries.

The Kőszeg Castle Theatre was founded in 1982. At the beginning, the management's goal was to present Hungarian historical dramas. There are not only prosaic performances in the programme of the theatre, but operas, concerts of classical music, shows on the streets, dance shows and folklore programmes as well.
More information: Jurisics-vár Művelődési Központ és Várszínház

A picturesque city rich of monuments. The roman ages ruins are hidden deep under the city. The northern gate of the city was defended by the Fire Tower, which became a symbol of the town. The famous Stornó house gained its name from the former chimney-sweep later became renovator and art collector Ferenc Stornó. The main square is dominated by the grey friars church, so-called Goat church. In the middle of the square there is a blessed trinity baroque column. The gothic style synagogue is quite rare in other part of Europe too. In the southern part of the city on the amphitheatre of hills, in Lővérek there are lots of wonderful cottages. It is excellent place for trips and almost every path conducts to the Károly hill and then to the 23 m heigh scenic point.

Halfway between Szombathely and Kőszeg, in Gyöngyösfalu, a charming village, you can find Holdfény Liget. In this friendly place, you can find quiet, relaxation, camping possibilities, and cultural, as well as sports programmes, for you and your whole family. 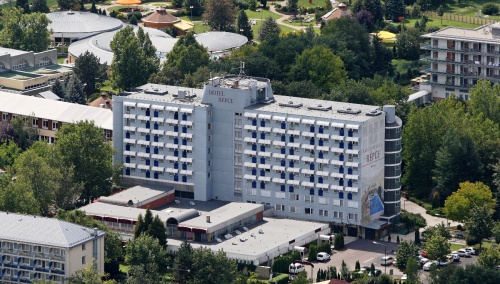 Please be advised that, in accordance with the governmental and international regulations issued in the emergency declared due to the coronavirus, the hotels operated by Hunguest Hotels Zrt. will cease operation from 22 March 2020 in order to protect you and our employees and their family members.

We do not accept new guests from today, but we do cater for the guests who are staying in our hotels at the moment.

By means of this decision, in addition to security considerations, we want to prevent any deterioration in the quality of our services you are accustomed to. Due to the restrictive measures which have already taken and may be taken in the future, we will no longer be able to provide the quality of services rightly expected by you and also required of ourselves by us.

We do hope that you will agree with our decision, and thus we can assist you in meeting us safely soon.

We will try to get in touch with all of our guests having a booking for the upcoming period, and our staff will be happy to assist you with the issues of bookings, changing dates and reopening our hotels.